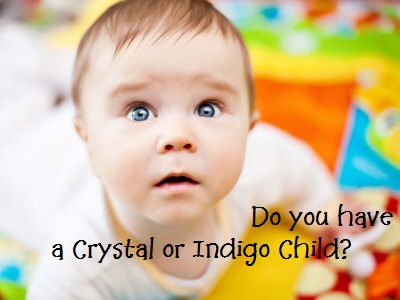 This whole phenomenon of Indigo Children is becoming more familiar to society. Many other things dealing with the paranormal is coming to the surface. Many children and young adults are showing more abilities to understand, and exhibit psychic and mediumistic tendencies. I can remember early on in my private readings, being told by my spirit guides about “blue-ray” babies, which I think was a similar meaning to indigo.

These children, known as indigos or crystal children, are usually highly empathic and don’t know how to deal with it. They are introducing the change that is springing forth even now. Those of us who are in the paranormal and metaphysical fields are here to be guides for the way-showers, and help them keep grounded. Then they are able to assist us in the transformation of the world. I believe the kids that see sparkles fall into this group of indigos and crystal children. And we must do much more to be of assistance.

The term “indigo children” came about when parapsychologist and psychic, Nancy Ann Tappe developed the concept in the 1970s. Tappe published the book Understanding Your Life Through Color in 1982. She described noticing that many children were being born in the 1960s with “indigo” auras.

The idea was revolutionized by the 1998 book The Indigo Children: The New Kids Have Arrived, written by Lee Carroll and Jan Tober. Their book became the primary source on “indigo children”. They describe the goal of indigo children to be a remaking of the world into one lacking war, trash and processed food.

Characteristics of Indigos
Indigo children are believed to be empathetic, curious, strong-willed, and independent. They sometimes possess a clear sense of meaning and purpose. Other traits may include a high intelligence quotient, an innate intuitive ability, and opposition to authority. According to Tober and Carroll, indigo children function poorly in conventional schools and often do better in home schooling or unconventional educational settings.

As the universe started speeding up, and the world needed more assistance in shifting and changing into higher frequencies, the type of child birthing on Earth started to become more refined and focused.

Crystal Children
Many children who were born in the late 1990s are a blend of being telepathic and intuitive. They have a pure energy field, which is sometimes called crystalline, or crystal-like. Since they have such intense abilities, they are able to communicate with one another very easily. Conversely, communicating with adults – especially parents – they can be easily misunderstood. They are more advanced spiritually, and because of that some of them delay talking until they are three or four years old. Unfortunately, I have heard of some in this case being diagnosed as autistic.

Sound is usually significant to Crystal children. So, some children may communicate by singing, humming, or droning without using regular words. They may also use their own form of sign language. They are very aware of truth since they are mind-conscious, so you must always be truthful with your crystal child to encourage trust.
All kids are psychic. Remember that kids are kids no matter what. Support them, love them, and encourage them.

Here is a list of observations that might help you recognize children with special gifts. Your child may be perceiving life differently that established society dictates are correct. Not all these abilities will show up with your child. There may only be one or two. But they are things you should be aware of to watch for, and understand if your child talks about it.

• Seeing fairies or angels
• Being profoundly aware of someone’s emotion
• Energetic communication with rocks, trees, or plants
• Going somewhere to learn in your ‘dreams’
• Seeing an intense glittering pinpoint of light (aka Sparkles)
• Observing or seeing spirit beings or ghosts
• Perceiving that someone was sick or hurting
• An effect on electrical devices such as radios, lights, watches
• Hearing high pitched sounds internally
• Communicating with or seeing someone who’s passed on
• Memory of another lifetime
• Feeling an energy field around someone
• Being in two places at the same time

(one of the emails to this blog about Sparkles): My name is Martin and I am 18 years old. I’ve been seeing sparkles for a very long time. I see them all the time: When my eyes are open, closed, at night, during the day, even when I dream. The sparkles seem to communicate something through the dream – usually something that is beyond my understanding.

I don’t feel like they are harmful. I’m sharing this because people are curious about other kids. I’ve lived and slept and thought and breathed with this eternal aura surrounding me, fading, shifting, lighting up and sparkling for a really long time. It’s a true part of me and no one has ever had any clue of what I’m talking about. When I try to describe it they don’t believe me.

I feel in my heart of hearts is that each dot, glitter, is a universe that unknowingly observes and weaves itself in and around others: Like whole realities that float through and reappear throughout an infinite cosmos of realities, uncountable, but always flowing. But I’m only 18. I’m trying my best to understand these better, but it does get overwhelmingly complex at times. I hope this was helpful for anyone who reads it. Thanks.

The excerpt is taken from Does Your Child See Sparkles? Help for Parents Guiding Psychic Kids, by Melissa Leath.

One thought on “The Indigos and Crystal Society”

Live your life with integrity!

The Go Between RSS Feed

Being a Certified Medium for the past 30 years, Melissa's learned so much when it comes to metaphysical and spiritual concepts. She also has seen plenty in the seance room. Rev. Leath is a recognized meditation and spiritual growth expert and has worked with thousands of clients and workshop attendees spreading the idea of empowerment. She is an author of several books and CD's including the soon-to-be published (September 2011 Balboa press division of Hay House) "Psychic Integrity: The Respected Practice of Modern-Day Mystics," which is a guide book for novice and seasoned psychics and mediums as well as their clients.